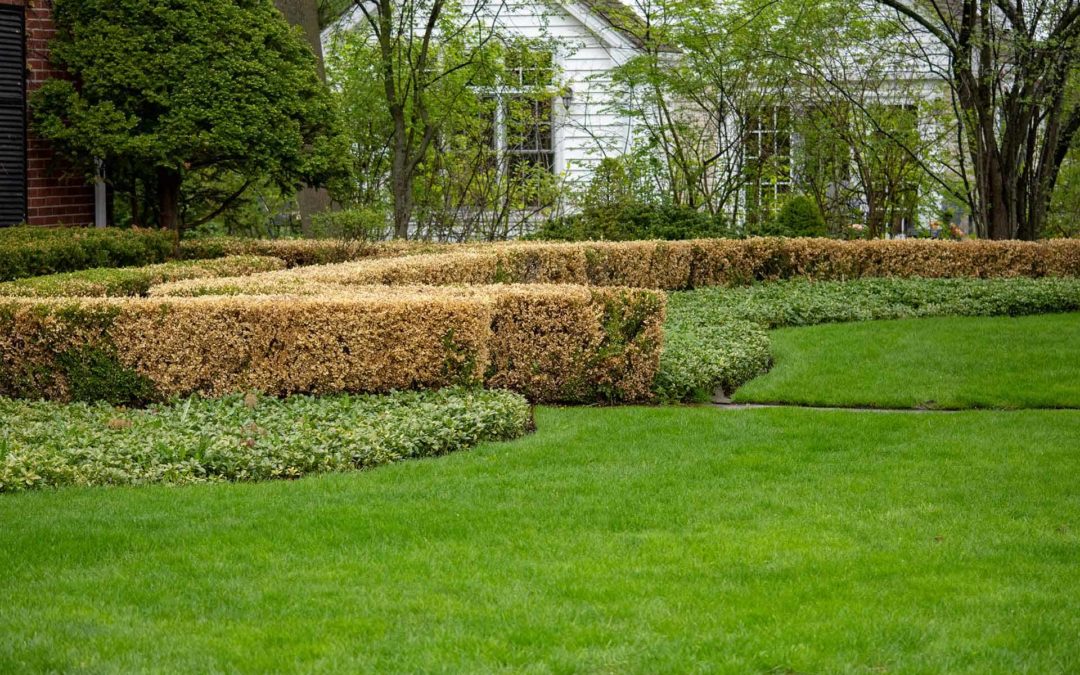 While conducting post-winter assessments of client properties, Scott Byron & Co. representatives have been observing a great degree of winter damage to boxwood shrubs. This damage can be due to several causes. Winter desiccation (dehydration), boxwood leaf miner and Volutella blight are the main culprits. There are several rarer causes that may be involved as well such as salt damage and boxwood blight.

Winter desiccation is probably the most common cause. It presents as light brown or yellow leaves on the outside of the plant. Winter desiccation is caused by leaves losing moisture to cold winter winds that cannot be replaced by roots due to frozen soil. In most cases it can be trimmed off with minimal damage to the plant and the plant should grow out of it. In extreme cases it may kill the entire plant and replacement is necessary. Application of anti-desiccant and installation of fabric screens can help avoid desiccation in the fall. There is another phenomenon called bronzing which may occur on many evergreens including boxwoods. Bronzing is caused by the production of anthocyanin pigments in the leaf tissue and appears as red or orange leaves. The anthocyanin protect leaf tissue against winter sun and act as a natural sunscreen. The plant will return to its normal green color as chlorophyll is produced in the spring.

We have seen a large increase in Boxwood leaf miner in recent years. Boxwood leaf miner is a pest that lays its eggs in boxwood leaves in the spring. The larva then hatch and begin to eat the tissue between the upper and lower leaf surfaces. They then emerge from the leaf and pupate in the ground before emerging as adults and beginning the cycle again. The damage appears as yellowing and browning on last year’s growth. If boxwood leaf miner is present it is recommended to apply a systemic insecticide in the spring to kill the larvae before they can cause damage.

Volutella blight appears as dead branches on boxwoods. The stem tissue will exhibit a pink or orange canker. The canker kills the stem tissue causing leaf desiccation. If Volutella is suspected the affected tissue should be pruned out below the infection site. In some cases a fungicide treatment can help as can avoiding trimming during wet conditions. In some cases replacement may be necessary.

Salt damage occurs when salt laden snow and ice is piled up during the winter on top of boxwood and groundcover. The plants die where the salt contacts the leaf tissue or in severe cases the whole plant dies at once. For mild cases, gypsum can be applied to neutralize the salt and let it flush out of the soil. In severe cases the plant and soil may need to be replaced.

Boxwood blight is a very serious disease that can kill large amounts of boxwoods. It can spread through infected tools and plants. It appears as defoliation usually starting in the middle of the plant. Black cankers may be present on the stems as well as dark streaks in the vascular tissue. If boxwood blight is confirmed the plant should be removed immediately, bagged and disposed to prevent transmission. It usually comes in on infected nursery stock which we are very vigilant about avoiding.

If you have boxwood shrubs that appear damaged or stressed, contact us for an evaluation and consultation.

Healthy boxwoods like this are normally thick, lush and medium to dark green in color.